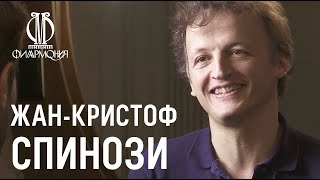 For some, he is the ‘enfant terrible’ of classical music.  For others, he is a true musician-choreographer endowed with an extraordinary sense of rhythm and physical elation.

Originally a violinist, his passion for all kinds of musical expression led him to study conducting at a young age. From his very first concerts, he sought to decompartmentalise the different types of music: he became a “period instrumentalist to the modernists, and a modernist to the period instrumentalists”.  Passionate about chamber music and ensemble music, he founded the Matheus Quartet in 1991.<<cut>>

For this Corsican musician adopted into Brittany, his regional presence is of the greatest importance.  It was at the Quartz in Brest that the Matheus Quartet became the Matheus Ensemble.

In 2005, his passionate research into period music led him to make a series of recordings with the Ensemble Matheus of Vivaldi’s previously unrecorded works.  They released a number of albums and four opera recordings which quickly became legendary, receiving great critical acclaim around the world.

Over the course of a variety of engagements, Jean-Christophe Spinosi has embarked on musical collaborations with like-minded artists who also wanted to breathe new life and passion into classical music; artists such as Cecilia Bartoli, Marie-Nicole Lemieux, Natalie Dessay and Philippe Jaroussky, with whom he recorded the Double Gold-selling album ‘Heroes’ for EMI-Virgin Classics.

In founding the Ensemble Matheus, Jean-Christophe Spinosi created the only specialised ensemble of international standing to be born in the region of Brittany, and the ensemble is in residence at the Quartz in Brest, its ‘town of birth’.  Since 2007 Spinosi has conducted his ensemble in a new production each year at the Théâtre du Châtelet in Paris.

Spinosi has worked with some of the most imaginative directors on the international scene, such as Pierrick Sorin (Rossini’s La pietra del Paragone in 2007), Oleg Kulik (Monteverdi’s Vespers of the Blessed Virgin Mary in 2009) and Claus Guth (Handel’s Messiah at the Theater an der Wien in 2009).  For his production of Orlando Paladino, Jean-Christophe is once again reaching out to new audiences by teaming up with Director Kamel Ouali.

His productions at the Opéra de Paris and the Théâtre des Champs-Elysées have been met with similar critical acclaim, the most recent being his well-researched performances of Mozart’s Die Zauberflöte.

Italian mezzo-soprano Cecilia Bartoli invited Jean-Christophe Spinosi and the Ensemble Matheus to perform a series of concerts with her in June 2011. Their fruitful collaboration grew into a European tour of concerts in Munich, Prague, Baden-Baden and at the Château de Versailles.

The 2013-2014 season will see his continued association with Cecilia Bartoli in the Rossini cycle, with Otello at the Théâtre des Champs-Elysées in Paris, La Cenerentola in Salzburg –Whitsun and summer– and Italiana in Algeri in Dortmund. In addition, he has given a new performance of La Pietra del Paragone at the Théâtre du Châtelet in Paris in January 2014, following the fifteen exceptional French performances of Handel’s Orlando scheduled for this autumn (in Lorient, Brest, Rennes, Toulouse and Versailles).

He will appear next season at the Theater an der Wien for Bizet’s Pêcheurs de Perles, or at the Châtelet for Mozart’s Il re pastore.

His last recording by Deutsche Grammophon “Miroirs” has been acclaimed by Diapason and with a “Choc” from Classica.